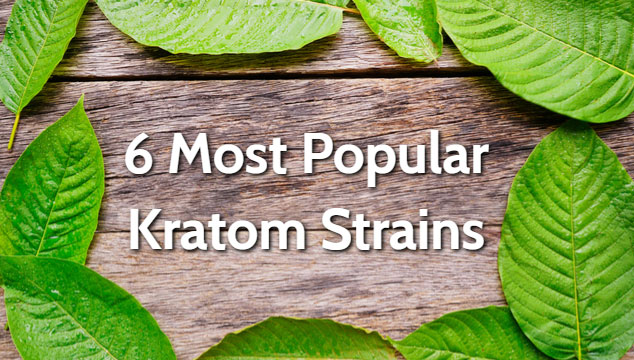 When people say “kratom”, they usually think it’s one and the same plant. In a way, it is, but things are a bit more complicated than that. There are several types or strains of kratom.

The scientific name for this plant is Mitragyna Speciosa, but it’s commonly known as kratom. This is a tropical evergreen tree and (not many people know this) it belongs to the coffee family.

Kratom grows in Southeast Asia and it’s been used in traditional medicine for a long time. Some records say it started being used during the 19thcentury, but kratom has definitely been around much longer than that.

The western world has known about kratom for almost 200 years, but the local population of Southeast Asia had definitely used the plant long before any European explorers set foot there.

Because of its properties, kratom was used among workers to battle fatigue, but it was also used as herbal medicine to treat various problems. It can reduce pain, increase energy, improve one’s appetite and put one in a good mood.

As we mentioned in our previous posts, kratom can be used for many things, from treating muscle and joint pain to more severe conditions. Kratom is even used for treating cancer pain.

However, kratom is also vastly used for staying focused and getting more energy. So, here are our top 5 most popular kratom strains.

One of the most widely available and affordable kratom strains, Red Bali remains a user favorite.

It’s mainly used for pain relief and to improve the mood. Many also report it being helpful against stress and anxiety. Red Bali Kratom provides relaxation and can aid with a variety of sleep issues as well.

Though not as common, a number of users also use it to boost their metabolism.

Because if its pain-relieving and relaxing properties, Red Bali is usually taken in larger doses. If you’re less experienced or new to kratom, we advise you not to take a large dose right away though. You can easily take a dose that your body isn’t yet ready for and not feel well.

Instead, start with a smaller dose, for instance, 2 grams. Then, add on extra gram or two every 30 minutes to an hour. Once you start noticing that your pain subsides and you’re feeling more relaxed, you’ve found your dose.

This is definitely one of the kratom users’ favorite strains to boost the mood and increase focus and energy. It’s also one of the most popular kratom strains.

The reason why Maeng Da Kratom is so effective lies in its alkaloids. This kratom strain has a high concentration of alkaloids that result in increased energy levels. After intake, a person feels more motivated, more focused, and also experiences more confidence.

If you’re taking Maeng Da Kratom for the first time, don’t be surprised if you get extremely energized. This can happen with White Maeng Da; the effects of Green Maeng Da are slightly milder.

It’s best to take this kratom variety in low doses. Start with 2 grams or even less if you are not experienced or have a lower body fat percentage. Maeng Da Kratom is much stronger than most other kratom strains, and you should keep that in mind when using it.

This kratom strain is especially popular among those who are experiencing constant stress. Users have said time and again that White Borneo Kratom gives them the much-needed motivation and stimulation.

It’s also very effective for those who experience regular mood swings. White Borneo will regulate mood swings and stimulate the mind and body.

Many people also use White Borneo Kratom in the morning as a replacement for tea or coffee. And they are happy with the results because this kratom strain works as an instant pick-me-up. It lifts your spirits and puts you in a good mood.

Another reason why White Borneo is one of the most popular kratom strains hides in the fact it’s an antidepressant. It works especially well as an instant antidepressant. So, if you’d like to start feeling better right away, White Thai Kratom may be your type.

The Red Borneo Kratom is one of the most sedative strains of kratom. It comes from the island of Borneo and it is largely harvested in Indonesia, as the country controls the majority of the island.

There are many reasons why people use the Red Borneo Kratom, but the main one is because this kratom strain provides a feeling of relaxation for the mind and body. In addition to this, the Red Borneo Kratom has proven to be very useful when it comes to relieving the symptoms of depression, hypertension, and chronic pain.

This kratom strain has several beneficial effects, but it’s mostly known for relieving pain and creating a feeling of euphoria. People who take this strain experience a feeling of relaxation and calmness, which is why the Red Borneo Kratom remains a “crowd favorite”.

It’s very good for relaxing the mind and the body at the same time and, compared to some other kratom strains, its effects last very long.

The Red Borneo Kratom can also be taken in small to moderate doses. This is more than enough to result in mood-enhancing effects.

As the name suggests, this strain comes from Malaysia and Green Malay Kratom right up there with the most popular kratom strains.

The reason why this strain is so popular comes from the fact that it’s grown in a unique region. In Malaysia’s countryside, where the Green Malay Kratom is grown, the soil composition is unique and it gives this strain special qualities. That’s why it also gives a longer experience upon taking.

In addition to this, the Green Malay Kratom is good for motivation and for boosting your cognitive processes. Most people love this kratom strain because it makes them feel good and helps them become more efficient in daily activities.

Coming from the Indonesian island of Sumatra, this kratom strain has been around for a long time, belonging to the intricate Indonesian culture. The Red Sumatra Kratom is thought by many to be the ultimate solution for stress relief.

This kratom strain results in opioid-like effects, helping a person relax and get in a good mood. Red Sumatra Kratom is also very good because it lowers blood pressure, calms the nerves, and creates a euphoric feeling.

If taken in small to moderate doses, this kratom strain probably won’t cause any side effects. But in higher doses, it may cause side-effects such as vomiting and nausea.

To avoid that, start with smaller doses and if you aren’t experiencing the desired effects, add a little more over time until you do. The Red Sumatra Kratom creates pleasurable effects that can last several hours (up to ten hours, even).

Do you agree with our list of the most popular kratom strains? Which strains may our list be missing and why? Which kratom strains are your favorite?

Receive the Latest News in Your Inbox!

Any cookies that may not be particularly necessary for the website to function and is used specifically to collect user personal data via analytics, ads, other embedded contents are termed as non-necessary cookies. It is mandatory to procure user consent prior to running these cookies on your website.